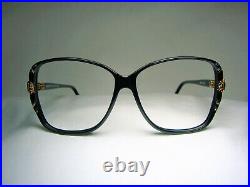 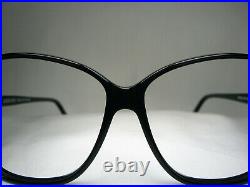 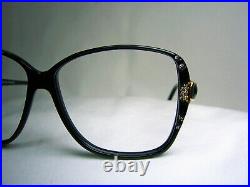 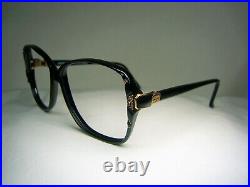 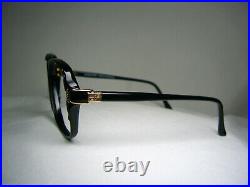 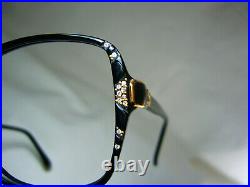 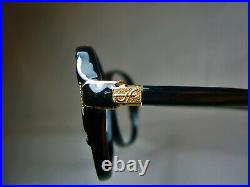 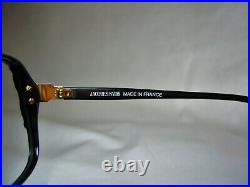 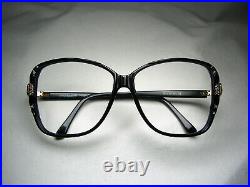 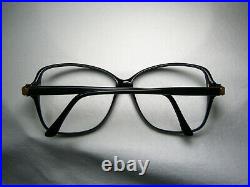 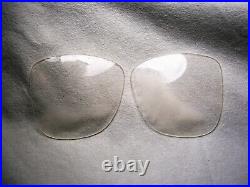 Utmost optical sophistication of the highest quality craftsmanship and materials, from most prestigious fashion icon Jacques Fath, a unique frame, very much sought after by collectors and wearers alike. Highly limited “Black Tie” edition (only 1000 frames ever produced), model oval square 87230 slightly oversized, size 137-5615, hinge to hinge inside width 138mm (5.4 inches). Entirely hand made abyssal black French acetate frame, sumptuously ornate with CZ crystals and white and yellow Gold plated accents on temple stems, stylishly embellished with engraved logos, equipped with high performance proprietary design hinge systems. In impeccable NOS, unused condition, presenting adequate markings, comes with original pouch (very rare and much appreciated by collectors). Note: Lenses presenting light aging blemishes (clouding) which should make no difference since new lenses will get installed. Fitted with factory clear demo lenses that can be replaced with either prescription or sun lenses, for a super trendy look. Not only a unique and iconic piece of optical history, but also a superb design amalgamated with superlative manufacture and best quality materials, a daring fashion statement, as much collectable as it is wearable, simply put… A bit of history on Jacques Fath: Descendant of the Fath Royal Couturiers of the 18th century, providers to the Bourbon Royal Courts of France, they were the fashion designers of the era who set the fashion trends for the French Courts and implicitly the whole civilized world. Their family crest was then and still is today, the royal “fleur de lis” above a pair of scissors. They continued to create wonderful clothing fashions even after the fall of the Bourbons during the French Revolutions and are still doing it today. Jacques Fath was considered the best of the three dominant influences on postwar Haute Couture, the others being Christian Dior and Pierre Balmain. The playwright Georges Fath was his great-grandfather. When it comes to postwar fashion, Jacques Fath was the premiere designer following World War II. Born in France in the early 20th century, Fath grew up in a time of turmoil and unrest. In 1937, Fath launched his own collection out of a petite salon in the 8th arrondissement of Paris. Two years later, the designer wed Geneviève Boucher, a model and former secretary to Coco Chanel. As Fath and his wife expanded the brand to suit American audiences, he was also becoming a household name amongst the bourgeoisie in Paris. The couturier pioneered a number of fashions, including lace-top hosiery and glove-fitting ensembles, in addition to launching a fragrance line in 1946. Fath’s innovative designs and cross-continental reach would establish his brand as one of the most prominent post-WWII design houses, in company with Dior and Balmain. Before Fath could even thread a needle, his family’s connection to the fashion industry also had a 19th century royal stamp of approval. In many of Fath’s early designs, elements of the Empress’ regal style can be seen throughout his looks. Some of his exclusive clients; Evita Peron, Princess Elizabeth of Windsor (later to become Queen Elizabeth of England), Rita Hayworth, Lucie Daouphars (later to become The Dior Girl), Bettina Graziani (world’s first supermodel), Prince Aly Khan, Elizabeth Taylor, Dean Martin, Marylin Monroe, Jackie Kennedy etc… Note: We will replace the nose-pads with new ones if needed, also, the temple stems can be easily reshaped at the optician during the lens replacement. It is our mission to bring to you quality name brand frames, and in the process offer you exceptional 5 star customer service! Thank you for visiting with us and please accept our invitation to leisurely peruse thru the rest of our fine quality frames and sunglasses! The item “Jacques Fath luxury eyeglasses oval square scallop women’s frames NOS vintage” is in sale since Wednesday, November 18, 2020. This item is in the category “Clothing, Shoes & Accessories\Specialty\Vintage\Vintage Accessories\Eyeglasses”. The seller is “fineframez” and is located in Jud. Iasi. This item can be shipped worldwide.

VINTAGE CARTIER 5416 / GO... WITH SERIAL NUMBER – 713599. VINTAGE CARTIER 5416 / GOLD LUXURY FRAME / MADE in FRANCE. They are guaranteed to be 100% authentic. They were made in.
VERY RARE AUTH VINTAGE CH... I DARE YOU TO FIND ANOTHER PAIR OF. THESE AWESOME YELLOW CAT EYES CHANEL SUNGLASSES FROM THE 60’s. IVE BEEN HOLDING ON TO THEM FOR YEARS. I
VINTAGE 60s LORGNETTES NI... Superb 1960s foldaway lorgnettes in clear plastic with glitter effect made in France ny Nina Ricci. The item “VINTAGE 60s LORGNETTES NINA RICCI. MADE IN FRANCE. UNWORN.
CARTIER Rimless Decor C S... Directly from my Shop. COLLECTION – VINTAGE METAL & COMPOSITE 2000s. SHAMAL C DECOR Small RIMLESS. GOLDEN PLATED 18 KT. 2000 serial year Mod. Decor c Shamal
GENUINE 18th CENTURY RARE... FRENCH VERY TYPICAL 18th CENTURY ROUND READING GLASSES. AND “DIAMOND” PIECE AT BRIDGE (WITHOUT HALLMARKS). LENS SIZE: 36 mm. BRIDGE: 28 mm TEMPLES: 150 mm. FRAME AND
Vintage CARTIER Santos Ey... Vintage CARTIER Santos Eyeglasses Sunglasses Lunettes Gold Plated Frame. PLEASE EXAMINE THE PICTURES CLOSELY FOR THE CONDITION OF THE GLASSES, WHAT YOU SEE IN THE PICTURES IS
New ALAIN MIKLI 5623 3006... Our customers satisfaction is our #1 priority. Ask us questions – we are ready to help you to find the glasses you are looking for. Authentic and
LANVIN Studio womens eyeg... LANVIN STUDIO eyeglass frames with case. Frame made in France. Previously owned and worn with average distress consistent with age and use-no lens-please refer to photographs. 140
Pugnale Eyewear Handmade ...
Vintage Morel aviator 12k... Vintage Morel aviator 12k gf eyeglasses. Awesome rare made in France 12k gf with a case but not original. This item is in the category “Clothing, Shoes
Recent Posts
Archives
Categories